This soothing and healing st john’s wort oil eases muscle pain as well as soothes wounds and sunburns. With its healing capability this hypericum oil makes a valuable addition to your first aid kit.

If you are not sure whether the summer has arrived, search for st. John wort. It is blooming at the time of the summer solstice in late June. It is also the birthday of the biblical John the Baptist - where the herb gets its name from and for me it is a clear sign of summer.

In latin Hypericum Perforatum, this herb is well known as a herb for depression and anxiety. However this versatile herb also called Saint Joan’s wort, Touch and Heal, Goatsweed or scare-devil has many other applications for use. It can be used internally in a form of tincture, tea or capsules or topically as an infused oil or salve. While for the herbal decoction we use stems, for infused oil just flowers. As one of its other names suggests it has wound healing properties and powerful first aid action, helps to stave off infection and repair cuts and promotes nerve regrowth.

In ancient times, girls wore wreaths of St. John's wort on the day of St. John , and danced around John's fire.  On this mysterious night, twigs were thrown into the river, and the virgin girl knew when the wilted flowers bloomed again that she would have a groom next year.  In Upper Austria, according to an old custom, peasants placed st. John wort plants between two slices of bread to protect their animals from disease.

In most cases St. John’s wort  is most potent when used fresh. Its fresh leaves and flowers exude a rich red juice that color any menstruum to which is macerated whether alcohol, water or oil.

“As an Amazon Associate, I earn from qualifying purchases.” Read full disclosure here.

where does st john's wort grow

Saint John’s wort can be harvested from early to mid summer. It grows worldwide  in disturbed areas such as pastures or along roadsides. St. John’s Wort is 1–3' (0.6–1 m) tall with five petaled yellow flowers. If you want to be really sure whether it is St. John wort you can squeeze a flower between your fingers and  red-purple hypericin oil will come out.

There is however one more trick that helps with identifying this medicinal plant and that are its leaves. They display tiny transparent dots that when you hold a leaf up to the sun, you’ll see the tiny pin pricks that will give them a perforated appearance. (which explains the second part of its latin name).

There is one herb that is often mistaken for st. JOhn wort and that is Ragwort (Jacobaea vulgaris) which is TOXIC. So be careful.

Saint John’s wort is a nervine and sedative herb successfully used as a herbal remedy for mild depression and anxiety. In folk medicine on the other hand it is the oil extract of St. John’s that is considered a good wound healer.

It contains hyperforin that possesses antibacterial and anti inflammatory properties and is very effective in the topical treatment of burns and wounds, mainly infected ones (1)

It makes for a wonderful oil for massage relieving nerve-related pain or soreness, stiffness, and muscle pain,

St.john wort oil is also beneficial for skin protection against sun exposure (2)  and for its ability to soothe & heal sunburns

Soothing and healing St. John’s wort oil is much more effective when made of fresh herbs rather than dried and is typical for its deep red color due to the hypericin content.

I have been making a few infusion oils in the past and always recommend using dried herbs to avoid spoilage, rancidity and increase shelf life.  In this case however, to make the most potent oil we will make an exception.

The best time to forage the flowers and stems of hypericum perforatum is on a sunny day. let them wilt  on a drying screen for a few hours to release most of the moisture.

If you don’t have access to fresh herbs you can order dried St. John’s wort from Mountain Rose Herbs. While it won’t be as potent as a fresh it will still possess medicinal benefits.

Use 250 ml sterilized jar (1 cup) that you fill with wilted herbal material.

Over time, the oil turns red.

Then filter it through a cheesecloth, squeeze out the rest,

store the oil in dark bottles away from direct sunlight.

When used for burns and sunburns , replace olive oil with linen seed oil instead.

How to apply the oil?

Gently massage this healing oil into scar tissues, burns, sunburns or bruises.
For nerve pain relief - massage into affected areas for adults. If a child is experiencing nerve pain, consult with a pediatrician.
To improve the absorption you can moisten the skin slightly before the message

How long does this st john wort oil last?

Due to increased moisture in the oil there is a higher chance for spoilage. You will usually notice a change in aroma of the oil when it goes bad. If stored in a cool and dark place it could last up to 5 months.

Can I make the oil faster?

This hypericum oil can be faster infused with a heated method. Place the jar in a double boiler or slow cooker and set the temperature at the lowest setting. After 4-5 hours you will notice the color change of the oil into a deep red tone. Strain the herbal material through the cheesecloth and store the pure oil in a dark bottle.

What makes the color of st. john's wort oil red?

In historical times the red color of the oil was attributed to the blood of Jesus, nowadays we have scientific explanations for red color that is present in all st. john wort macerations. It is the hypericin that is responsible for the color change.

If you intend to use this oil for burns and sunburns, replace olive oil with linen seed oil instead.

As an Amazon Associate and member of other affiliate programs, I earn from qualifying purchases.

Did you make this project? 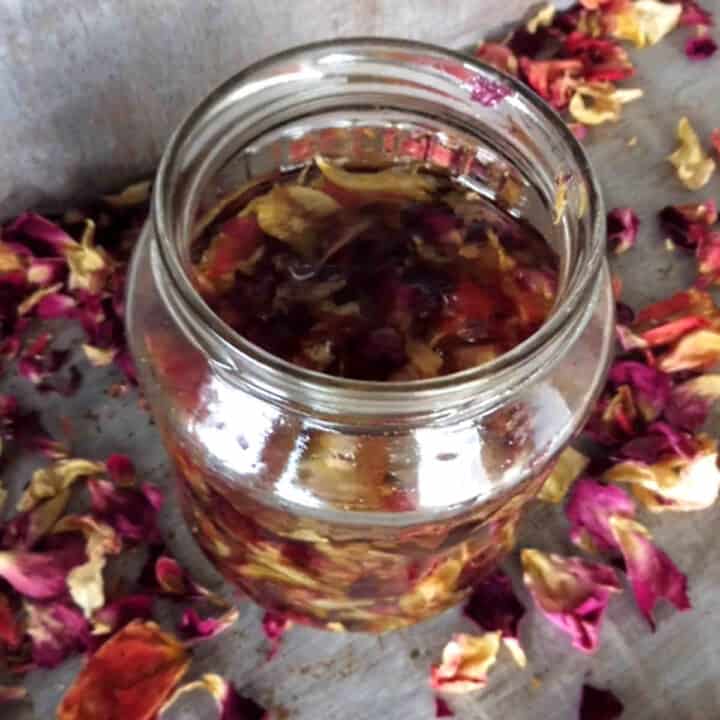 This highly scented and effective rose oil is a must have item in your household. Our DIY rose infused oil goes a little bit further with ultra rich grape seed oil and petals from Rose Damascena. 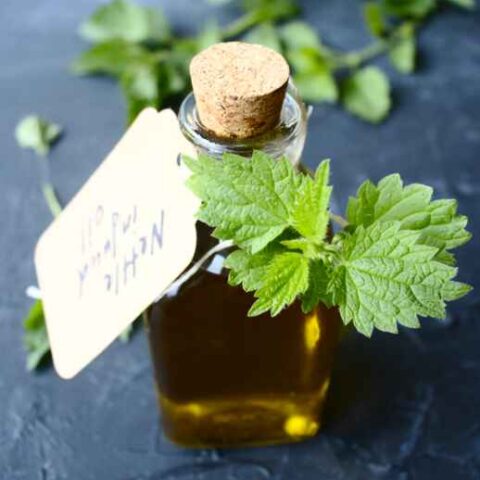 How to make nettle oil

This mineral-rich nettle oil is a powerful remedy with a wide spectrum of uses from easing stiff joints to scalp and hair treatment. Made of nettle leaves this effective oil might help with skin irritations or baldness. 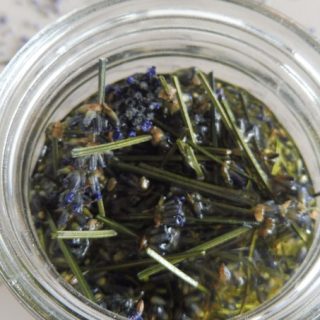 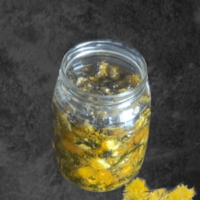 Dandelion oil is used in salves, lotions, and lip balms to soothe dry and cracked skin. Thanks to its capability to speed up the healing process of scars and calm down skin irritations dandelion oil is also efficient in acne treatment. 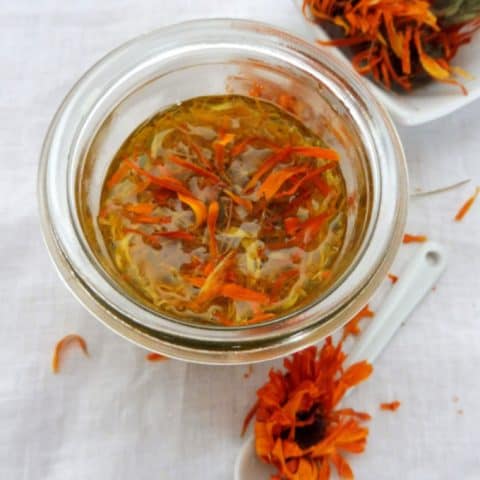 Uses and benefits of Calendula oil

Calendula (Calendula Officinalis, a.k.a. “Pot Marigold”) has its well-defined place in the herbal world. It’s not only the bright color and sweet smell that distinguish this plant from the others. But mainly it’s healing power and capability to cleanse wound made it internal as well as external number one choice of herbal healer. 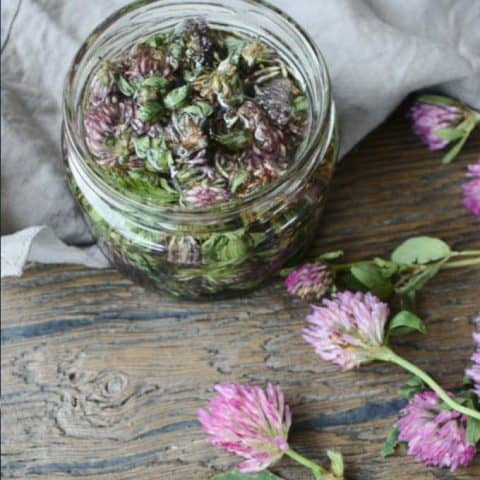 How to make & use red clover oil

purple blossoms of the red clover make an outstanding nourishing oil that, by increasing collagen production, improves the elasticity of your skin and reduces wrinkles. Its anti-inflammatory properties can also help with eczema or psoriasis. 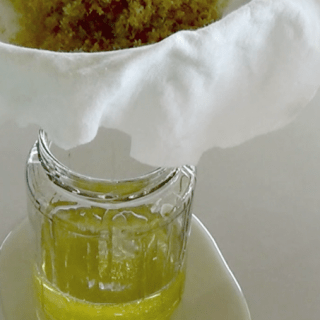 Elderflower infusion oil has a powerful soothing effect on the skin, improves skin complexion and is especially useful for older skin. However, it is also very effective in treating acne or sunburns. It's anti-inflammatory and anti-wrinkle properties made the elderflower infusion oil very popular in the cosmetic industry. 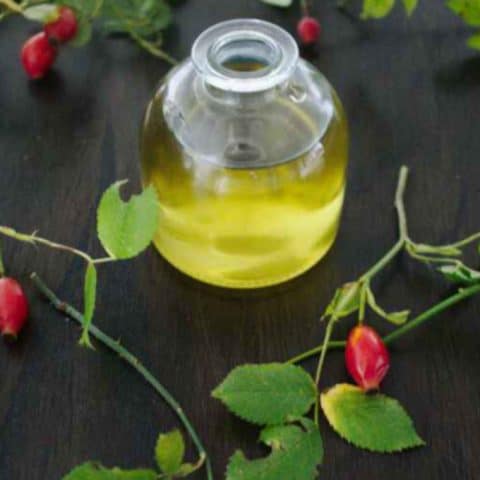 How to make Rosehip oil to heal your skin

Packed with antioxidants and fatty acids, rosehip oil is a natural versatile moisturizer that will heal your hair, nails and skin from bruises, acne and wrinkles. 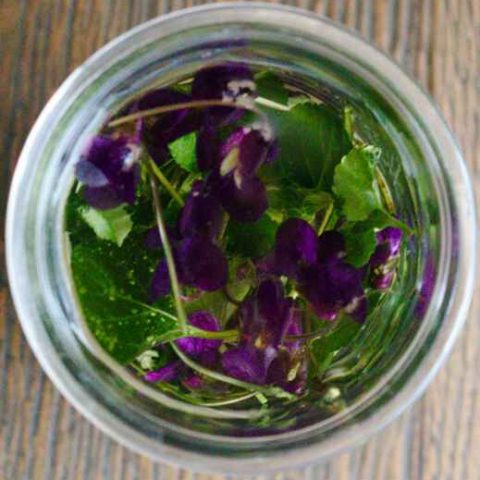 How to make Violet oil and its uses

Extracted from leaves and flowers of wild violets this violet oil possesses many benefits for skin and hair and might be also able to help with insomnia or rheumatic pain.

This site uses Akismet to reduce spam. Learn how your comment data is processed.

Helping folks become foragers and home herbalists so they can make healing remedies, natural skincare products, and healthy meals with wild herbs in their own kitchen.

A little about me

Hello, my name is Vladka and I started my herbal journey back in school Read More…